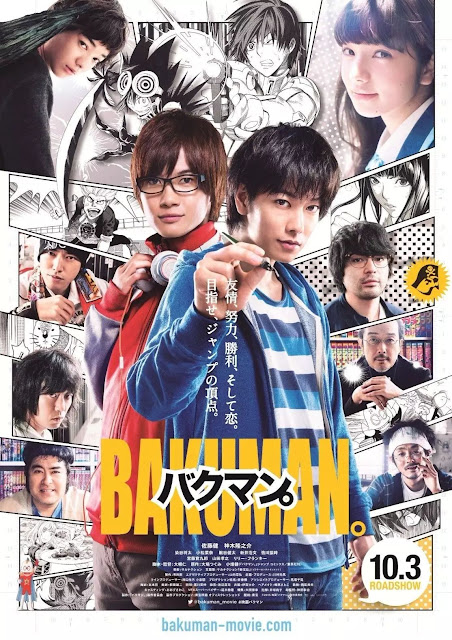 I've been a fan of DEATH NOTE since middle school, and when I knew Ohba Tsugumi and Obata Takeshi had made  another series together, I had meant to check it out.

I finished reading all volumes of BAKUMAN in high school and since then have re-read the series time to time. I really love it. I decided not to watch the anime (well, actually I did watch the first couple episodes, but then dropped it halfway through because I personally like the manga better), but when it was announced that there would be a live action adaptation of BAKUMAN, with one of my favourite actor starring in it, I knew I couldn't pass that one.

Before writing this blog entry, I have watched the BAKUMAN live action twice. I watched it for the third time to make sure that I still remember all the interesting things.

BAKUMAN is a story about two high school students, Mashiro and Takagi. Mashiro's uncle had been a mangaka (manga writer), but died from exhaustion and stress. Mashiro had said he wanted to be a mangaka like his uncle, but his uncle told him not to, because being a mangaka is a very difficult and competitive job.


After his uncle's death, Mashiro buried his dream, but he still keeps his hobby of drawing, especially drawing his long time crush, Azuki Miho. He often draws her in his notebook. One day though, Takagi found his notebook and his drawing in it, and out of nowhere, asked him to become his partner in writing a manga.

The original manga series and movie adaptation of BAKUMAN differ a bit in terms of storyline, and since they have to fit twenty volumes of manga into a two-hour movie, they need to cut a lot of scenes and focus on the first arc of the story. The representation of Mashiro and Takagi in the movie is also quite different from what I've originally thought. To be honest, when I heard Kamiki Ryunosuke would play in BAKUMAN, I had thought he would be Mashiro, since I remember him as the awkward, nerdy kid from Detective School Q. But then I realized that Kamiki fit Takagi's character in a way I would never thought him could be. Intelligent, surprisingly easily excitable Takagi is brought to life by Kamiki's acting. The choice of the director to put Satou Takeru as Mashiro was something I wasn't really excited about at first. I remembered him in Rurouni Kenshin and Q10, and his characters there weren't how I imagined Mashiro would be. But I gotta admit that he portrayed the awkward, kind of pessimistic Mashiro well.


I also love how they incorporate animation into the movie. My favourite scenes (and the ones that are most impressive for me) are when the manga they draw come to life and basically surround their spaces. It's like that intimate and exhilarating feeling of an artist when they finish their work of art and they can feel it emerge into the real life, no longer 2D, no longer just a thought or idea swimming around inside their head.

The setting of this movie revolves around their high school, Shounen JUMP editorial office, and several mangakas' studio. I can't describe how much I love every single mangaka's studio shown in the movie. Every mangaka has their own personalities and unique taste, so it differs from person to person. Mashiro and Takagi use Mashiro's uncle old studio, and to be honest, his studio greatly influences my dream studio. Having a personal work room is always a dream for me. The amount of mangas and drawing tools in the studio is really amazing. It's actually a bit too dark and stuffy for my personal taste, but I do want to fill in my studio with a lot of books, colourful stationery, and a nice, comfortable desk to work on.


As I've mentioned before, the movie also shows Shounen JUMP editorial office. I don't know whether the real one actually looks the same with what was shown in the movie, but if it does… Wow. I have no words to describe it. You gotta watch the movie itself.

From plot to character to effect to setting, I totally love BAKUMAN. It just feels nice to watch a movie where two young people, only one or two years younger than myself, are working hard to achieve their dream. It's also nice to see a movie where they present a job--a profession--that is more than just earning money and all business. BAKUMAN gives me a lot of new perspectives about being a mangaka, how difficult it is, how challenging it is, but also how fun, how mesmerizing, how fulfilling it is. It also shows a bit of relationship between mangaka, their editor, publishing company, and readers/fans, and how they influence each other's decisions.


Finally, I really recommend BAKUMAN for those who are interested in knowing the behind scene of creating manga, those who are currently lost or near giving up for their dream, and those who want a story about being young and taking risks for thing they love.

It is a great and very inspiring movie. If you want more closure about Mashiro and Takagi's long journey to become successful mangaka, you might want to read the manga or watch the anime too. I'm (maybe) planning to watch the anime sometime in the future, since I totally need a dose of inspiring story every now and then. Thank you for reading. See you again!

cinema in the dark english 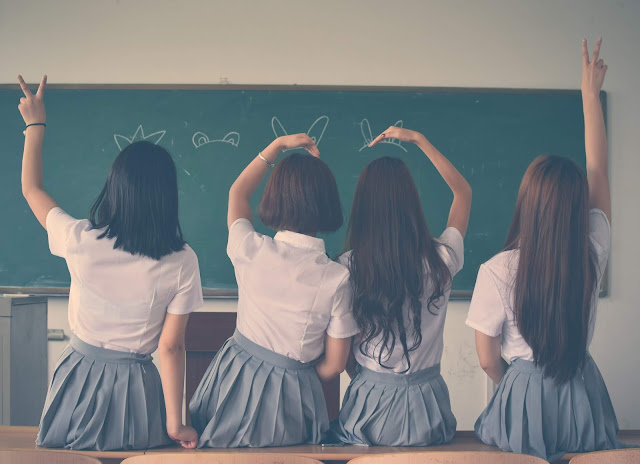 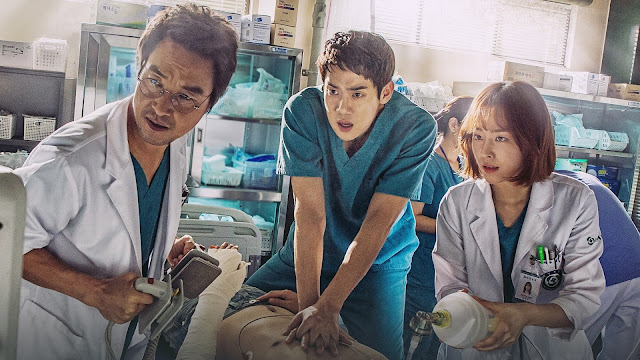 Due to the hospital prioritizing to treat a patient with higher social status, a boy from poor family lost his father. The bitterness from losing his father turned into ambition when a doctor reprimanded about his misdirected hatred. “Isn’t the best revenge,” the doctor said, “is proving that you are not the same people as they are?” Holding onto those words, KANG DONG-JOO worked his ass off to become the top medicine student, enter the best hospital in the country, and get to be the best doctor anyone has ever seen. But the world is not that easy nor that kind. Due to his temper, less favourable background, and a certain lack of judgement, instead of becoming the best doctor, Dong-joo was kicked out to a countryside hospital that he had never heard of before: Doldam Hospital. Located on the mountain with lack of proper facilities and workers, Dong-joo found himself in a predicament. He was determined to go back as soon as possible to his previous workplace, but Doldam Hospital
Curious? See the rest. »